Day 2 of the Science, Technology and Arts Festival brought us another fascinating mix of keynotes, panels and Q&As on topics broadly related to STEAM. The day was all about challenging biases, discovering new ideas, and searching for solutions to the big problems.

The day kicked off on the theme of the “Collaborative/Sharing Economy”, featuring a keynote by Zipcar co-founder Robin Chase and a panel discussion with Jules Coleman of on-demand cleaning company Hassle.com and Nilofer Merchant, author of Onlyness.

The panel discuss “What now for the Collaborative/Sharing Economy”

Robin Chase gave a fascinating presentation on the collaborative economy, presenting her “Peers Inc” theory, based on bringing together individual strengths and industrial strengths. She explained that we all have different strengths and that we invented organisations to do things we can’t do. The collaborative economy exploits the opportunity of “excess capacity”, whereby people share assets that already exist and are paid for e.g. cars, houses. She suggested that there are three ways to gain added value from excess capacity:

Robin argued that “people and platforms are inventing the collaborative economy and reinventing capitalism”, citing companies such as Ebay, Linux, Skype, Youtube and Wikipedia, and new forms of capital such as crowdfunding. She suggested that we are moving away from industrial capitalism to a collaborative economy where the lines are blurred between private and public assets and between employee and self-employed.

She also explained persuasively how the collaborative economy can contribute to addressing climate change, an issue for which her passion came through. Leveraging excess capacity allows us to decouple economic growth from environmental impact; AirBnB is now larger than the Hilton hotel group, but without building any hotels. We can also tap exponential learning, as in the case of education organisation Duolingo, which can help people to learn a foreign language in just 34 hours (as opposed to the college standard of 130 hours). Robin also stressed that because the collaborative economy gives us access to a diversity of peers, “the right person will appear” and this also enables real-time adoption of services. She cited the example of AirB&B in Cuba, when 2,000 rentals appeared within 6 months of the relaxing of trade relations with the US.

Robin Chase closed with four principles of the collaborative economy:

Reiterating her passion for addressing climate change, she declared that the collaborative economy is what we need to “speed the pace of evolution to prevent revolution, to tackle climate change and inequality”.

Today featured several inspiring female social entrepreneurs. Elena Rossini is a filmaker  who focuses her work on empowering women and girls. She has made a film about the Lottie doll (lottie.com), a doll that challenges stereotypical notions of “toys for girls”. The point of the Lottie doll is that it is about what the doll does, as opposed to how it looks. 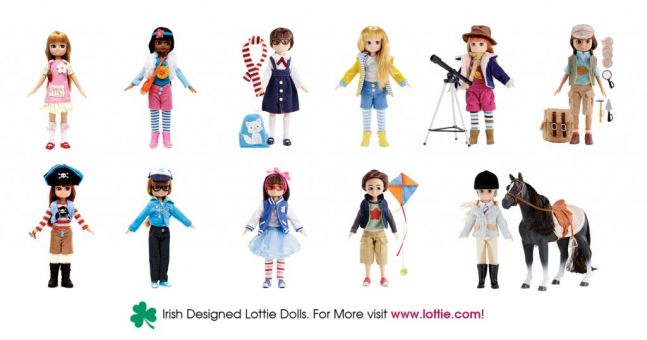 We also heard from Mary Carty, who co-founded Outbox Incubator, a social enterprise which supports girls in STEM, with fellow entrepreneur, STEMettes founder Anne-Marie Imafidon (http://outboxincubator.com/). The organisation launched last July with a program for 115 girls from 6 countries. Mary commented that “in this society, we cap the ambition of our girls, and we do it unconsciously. We want safe careers for our daughters”. She argued that the new “safety” is skills, confidence and a network. Last year’s Outbox has launched 29 companies.

Mary’s presentation was followed by an Outbox Incubator graduate, Niamh Scanlon, who was named EU Digital Girl of the Year 2015. She has already created the Apps “Autojournalist” and “Please Charge my eCar” and also mentors on the nationwide CoderDojo program. Niamh was joined on stage for a Future Leaders Q&A by several equally impressive young female STEM entrepreneurs. Vanessa Greene, fed up with the proliferation of beauty vlogs on Youtube, has started her own STEM blog looking at music and technology, while Edel Browne has founded Free Feet, which helps Parkinsons’ sufferers with tremors. 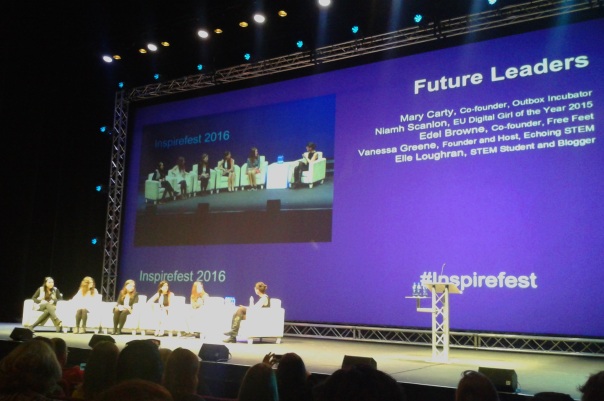 Some very very young entrepreneurs on the Inspirefest stage

The story of a social enterprise in a very different setting came from Jamila Abass, who has co-founded MFarm to help farmers to get a fair price for their crops. She observed an information gap in the supply chain; farmers and buyers were existing in two different planes and could not talk to each other, there was no communication between the informal and the formal market. Her solution was to enable direct communication between small farmers and buyers. She told us that “the African Green revolution is happening at a time when even the poorest farmer has access to a mobile phone”. Through Mfarm farmers receive texts detailing up to date market prices. They can also communicate with each other, form a co-operative and combine what they are selling, along with getting text advice from agricultural experts. Jamila also outlined how Mfarm diversified and expanded to respond to the challenges of the distributing products in Africa. To do so it also became a logistics company, collecting, packing and marketing products. 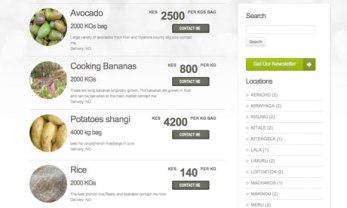 How MFarm collates pricing information and passes it on to farmers

Finally, Liz Jackson is the founder of The Inclusive Fashion & Design Collective, the first fashion trade association for people with disabilities. Her advocacy organisation grew out of her frustration at the lack of products made for people with disabilities. Fashion and other designers practice “universal design”, but she has conceptualised “neo-universal design”, where “you design for the exception”. In her excellent speech, she stressed that neo-universal design needs to be adopted as a business model, “not as a CSR halo”.

A section of the morning focused on Design, including a panel discussion on “Designing Human-centric Products and Services for the 21st Century” with Alan Siegel of Siegelvision, Mark Curtis of Fjord, Lorna Ross, Director of Design at the Mayo Clinic and Lara Hanlon, a designer at IBM studios. Lara highlighted the role design can play in engaging people with climate change by explaining her work on edible insects. Inspired by the challenge of food security in the face of climate change, Lara designed an education platform on “entomo” (insects as food), incorporating infographics, videos and yes, recipes (http://www.entomoproject.eu/#entomo). The panel agreed that design is crucial in making tools like this appealing to the public.

Donal Holland also introduced us to his fascinating work with “soft robotics” i.e. robotics made with soft materials, which makes them easier for humans to interact with. Robotics like this have a wide range of health applications, from helping people with neurological injuries to move their arms and legs to supporting people with heart defects. He and his colleagues have also done some STEM outreach, such as the website http://softroboticstoolkit.com/, which has since been used by over 90,000 people. The website also provides open source designs which students can use to build their own robots. The research team are building moulds using paper and 3D printer templates and have been testing these designs with kids all over the world.

One of the afternoon sessions was “The Investors”, incorporating several keynote speakers and a panel discussion. Adam Quinton, founder of Lucas Point Ventures, highlighted that only 6% of venture capitalists are women. He also drew our attention to sexism in Silicon Valley (http://www.elephantinthevalley.com/). Claudia Iannazzo of Pereg Ventures called for multinationals to be stronger on diversity, to set clear diversity targets and to be more thoughtful when organising events to attract and retain employees, e.g. replacing paintballing and golf outings with more universal activities.

A potential solution to the lack of women in venture capitalism was offered by Vicki Saunders from Canada, founder of SheEO, which supports and finances female entrepreneurs (http://www.sheeo.world/). She began her keynote by questioning the current system of investing and access to capital, explaining that the speculative economy is 50 times greater than the value creation economy, capital is aggregated into a small amount of hands, and SMEs, which make up 90% of the economy, are starved of capital. How SheEO works is that, in communities around the world, 1000 women come together through an online platform, pick 10 female-owned companies in their area and give them low-interest loans. The entrepreneurs also get access to networks, expertise and buying power.

The Fringe and some closing thoughts

Off to the Fringe again on Friday evening and to a highly anticipated festival event, Zoe Philpott’s play Ada.Ada.Ada. To a full house Ada Lovelace in her LED dress explained how she wrote the program for Charles Babbage’s “analytical engine” aka the world’s first computer, based on Babbage’s 5000 drawings. The performance included an audience participation exercise which aimed to recreate a basic computer circuit with string, cards and simple mathematics. The play was followed by a beautiful performance from Irish singer-songwriter Lisa Hannigan and her band. 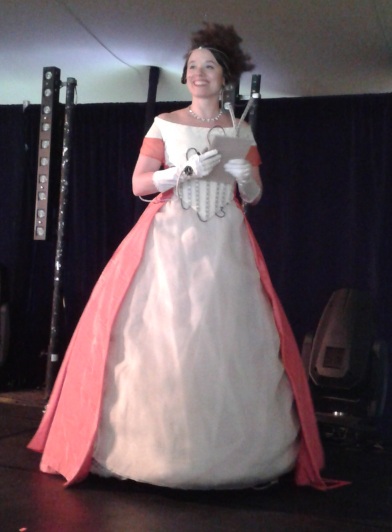 In summary, an appropriately inspiring two days. A few general thoughts looking back on the conference: 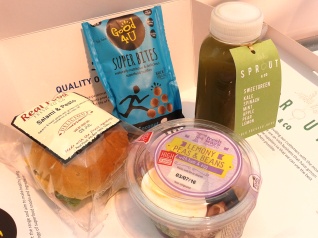 Hanging out at the Fringe bar (left) and lunch (right)