Last Sunday the European Green Foundation, together with the Green Foundation Ireland, organised a workshop in Queens University Belfast (above) on “Brexit: Populism and Progressive Politics”. The one day event was divided into four panels featuring speakers from a number of sectors, including academia, politics, think tanks and NGOs.

The first panel began with Steven Agnew, leader of the Green Party Northern Ireland. Discussing Brexit, he made the point that while the Green party will fight for the rights of people who aren’t included e.g. women, LGBTQ, it is less effective at including people “who are not as educated as us, people who have been victims of the policies of the right” i.e. many of the people who voted for Brexit. He asked “how do we let them tell their story, people who the working classes can connect to? Our big prejudice is education. We need to have these conversations in community centre as well as Queens University”

Ray Cunningham, Co-ordinator of the GreenHouse think tank, was the next speaker and he explained and challenged the idea of a “Green brexit”, as proposed by Michael Gove, among others. He highlighed that the people who voted for Brexit were not particularly sympathetic to green or progressive ideals, citing this YouGov survey in February 2017. Ray pointed out that “these outcomes require a government willing to pursue them and an electorate ready to support them, this is wishful thinking. You can’t push something through without a democratic mandate”. He also drew our attention to two relevant books on the topic: Ruling the Void and the Lure of Greatness. He concluded that there can only be a “progressive brexit” with the break up of the UK into republics within the EU, arguing that “Britain is aleady breaking up through how brexit is being handled”, e.g. Teresa May’s “very Southern English” cabinet.

The final speaker was Stephen Nolan of Trademark, who discussed the ideas of “radical munipicalism” and “solidarity economy”. Radical munipicalism is about “dispersing power and building social power” e.g. the Department of Commons in Naples, Barcelona en Comú and Cooperation Jackson. Examples of the solidarity economy are the Mondragon co-operative, the  Red Belt in Italy, where 50% of the workforce are in co-operatives, and the town of Marinaleda in Spain, which has 0% unemployment. Inspired by these examples, Steven has supported the development of several workers co-ops in Belfast in the last few years, including the Belfast Cleaning Society in 2011, the Creative Workers Co-op, Farmegeddon brewery, Lunasa cafe and Thats Arts. Read more about them here.

Panel 2: Brexit and Sustainability in Northern Ireland, the UK and Europe

The second panel focused on the impact of Brexit and the environment. Viviane Gravey, a lecturer in European Politics at Queens, suggested that Brexit creates challenges not only for environmental law in the UK but in the EU. She noted that while the UK government has often opposed EU environmental law, it has been a key leader in particular areas such as agriculture and climate change, and it is unclear who will replace the UK in this role e.g. the Common Agricultural Policy (CAP) may become less green.

Nichola Hughes of Sustainable Northern Ireland spoke of the challenges related to waste, climate change and energy. On waste, she drew our attention to the EU’s circular economy package, warning that products incompatible with the package could be shipped to the UK and used there. On climate change, she noted that the UK government has recently adopted its fifth low carbon budget, but it the UK is not part of the Emissions Trading Scheme, how will the government be accountable? She also noted that getting local authorities in Northern Ireland to act on climate change is difficult because, unlike in the Republic, there is no NI legislation to require them to do climate action plans. In relation to energy, Nichola observed that there is an element of the Tory party that is pro fracking and nuclear, but if renewable energy turns out to be “the better option financially” then it will be adopted.

James Orr of Friends of the Earth Northern Ireland focused on environmental issues around the border. For example, he noted that in the case of opposition to fracking in Fermanagh, industry played one side of the border off against the other. He suggested that “ecocide” is happening along the Irish border, citing the results of this project. His proposition was that we need to “rewild” the border, along the lines of the African transfrontier rewilding project.

Panel 3: Brexit, the Border and Futures for Ireland and Northern Ireland

The first speaker was Katy Hayward, a reader in Sociology in Queens, who took us through the impact of the EU on the border. She explained that the EU has changed the border in a number of ways, such as the depoliticization of cross border co-operation, common EU citizenship, the right to cross border work and education and research co-operation.

Claire Bailey, MLA for the Green Party NI, spoke of how, in the UK, the impact of Brexit on Ireland is not being considered, and Ireland is often seen as something seperate. She added that “we have never made people feel comfortable with the multiple identities we can have in Northern Ireland”, and explained that Brexit complicates this further.

The next speaker was John Kyle, Belfast city councillor and member of the Progressive Unionist Party. He noted that Unionists are very divided on Brexit, even within their parties, and that “tribal divisions between nationalists and unionists are worse than they have been for a couple of decades”. He argued that in Northern Ireland people view the EU institutions as remote and bureaucratic. He suggested that we need a North-South ministerial council, an active civic forum, a British-Irish council, a common travel area and to see the cultural rights of NI citizens protected.

Lastly, David Phinnemore, Professor of European Politics in Queens, set out his ideas for “differentiated withdrawal” for Northern Ireland, whereby the terms of withdrawal and the future relationship with the EU could be different for NI. He suggested that there is precedence for treating part of a State differently e.g. Greenland, Svaalbard. He observed that a language is beginning to emerge around “flexible and imaginative solutions” to reflect the unique situation of NI, and Teresa May also recently spoke of finding “special solutions” for NI.

The first speaker in this sessions was Dick Pels, Professor of Sociology at Brunel University in London. He discussed global politics in 2017, with an emphasis on Brexit and Trump, suggesting that what we are seeing is a clash between two types of democracy – populist (plebicitary) and pluralist (liberal).

Lee McGowan, Professor of Politics in Queens, looked at the rise of populism in Europe, drawing our attention to the reduced support for the major parties in the recent German elections. He noted that centre right parties e.g. in Austria, are now starting to adopt the slogans and themes of the far right parties, “making political capital out of it”. He asked “are we seeing a Silent counter revolution – revenge against the establishment and left-wing elites?” Prof McGowan used the image below, which shows how people accross Europe feel about non-EU immigration, to illustrate his points. 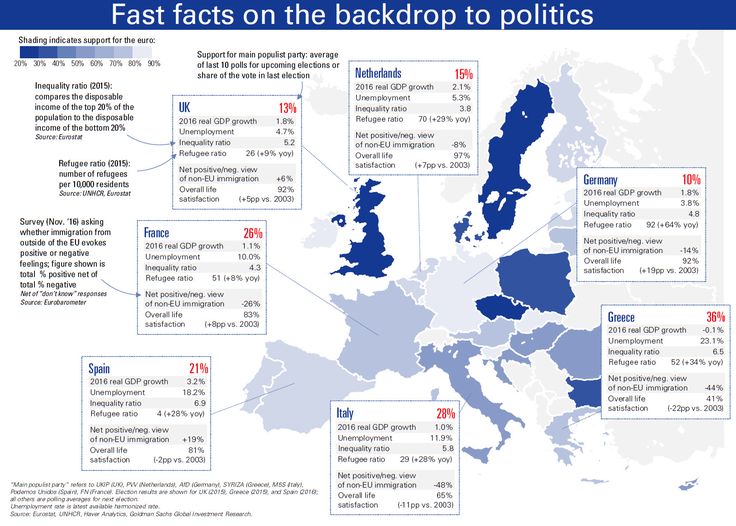 Sophie Long, a recent doctoral graduate in politics in Queens, offered the following advice on how Greens can respond to populism:

Finally, Eamon Ryan, TD and leader of the Irish Green party, discussed Brexit and the rise of the right. To conclude, he had some inspiring words on how Greens can use Brexit as an opportunity to offer people an alternative to populism:

“If ecology is about connection and interconnection, we need to talk to the other side, we need to go out and talk to everyone. You have to engage in a way that’s respectful. We can’t completely cut off the right. In doing this we will be true to our original principles.

Grab the space by being decent, by talking to everyone, by working with everyone, not by trying to be the boss; start listening”